A Handful of … Words. 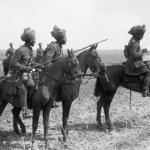 I went to see a play the other afternoon; I had been waiting to see it ever since I spied a line about its intriguing title on Twitter in September: Fear in a Handful of Dust.

Then I saw it was set during the First World War. More, it was set in the trenches. Not much else was said at the time, but it was enough to whet my curiosity, so when last week I saw it was on – and further, that there was a writing opportunity involved, I stuffed my note-and sketch-books into the Black Hole that serves as a bag, and set off.

Had I been there before, I might have made a better choice of bus; next time I shall be more prepared. I arrived at CogArtSpace, lunch-less and virtually breakfast-less, in time for one very welcome mug of tea which they kindly allowed me to take upstairs to the theatre. I did my best not to slurp. I suppose I should have been drinking it out of a billy-can, in keeping with the setting of the play.  I relinquished it fairly quickly in favour of my note-books, however. I would have sketched (I generally try to when I go to the theatre unless the charcoal makes too much noise during the quiet bits), but the ideas, once they started coming, didn’t really allow me to do other than scribble.

The action evolves in a trench in early September 1916 – the audience becomes part of that trench, listening in on two soldiers, battling their way through fear, hope, despair and contrasts – contrasts in their backgrounds, culture and beliefs, struggling towards an uneven camaraderie, ultimately attempting to save each other’s lives.

The atmosphere is faultless as is the acting – well-chosen, well-placed and well-delivered, they convince, involve and empathize.

The size of the theatre naturally makes it an immersive experience – yet the trench itself takes on a larger presence as the play goes on, until it becomes one of the players; in turn sheltering, challenging and intimidating until the final challenge is set and accepted.

What I found particularly engaging, aside from the striving of humanity against all odds, was the theme of India: until now there has been little Western coverage of the Indian Army in the trenches of WWI – yet its men did help shorten the war  (1914sikhs.org) and battles like Gallipoli might have had a very different outcome had more of them been deployed.

Happily the focus is gradually changing from general unawareness to acute appreciation, and the poignant images of wounded Sikh soldiers at Brighton Pavilion Hospital, the poetry of their letters home, the dauntless courage shown in the face of a seemingly implacable enemy and more will, I hope, take their true place in the annals of history alongside the Owens, Sassoons and Graves of the Western Front. It was with this in mind that I wrote my pennyworth of response, and while there was a great deal more I wished to put in, there is only so much anyone can fit into fifteen minutes of stage. Yet from this I hope something more may come. (And now to find some actors …)

Meanwhile I close with an example of the Indian Army’s own particular brand of bravery in the following anecdote from the interview with Gordon Corrigan on 1914sikhs.org:

“…There is the story of Rifleman Gane Gurung, 2/3rd Gurkha Rifles, at Neuve Chapelle. A British advance was held up by a house in the middle of the village which was fortified and strongly held by German infantry. Without orders, and in an example of suicidal stupidity (and bravery), Gane alone ran across the square and burst through the front door. Everyone assumed he would shortly be dead.

There was much shooting and shouting, then silence. The front door opened and out came a file of seven large Germans, hands in the air, followed by a 5ft, 2 inches Gane with rifle and bayonet. The village was captured shortly afterwards.”

Fear In A Handful of Dust by Sevan K.Greene will run through December until January 9th at Cog ArtSpace

Fearful Response, 5 writers’ responses to Fear in a Handful of Dust, will be directed and performed at Cog ArtSpace on the 16th of December