A Night at the Theatre…

The other day I spent the afternoon and evening in the company of Mr Goya and Mr Foote – and a good time was had by all: Mr Goya as irrepressible as ever, his tone a little less acerbic than in his ‘Disasters of War’; his sitters treated with sympathy for their intellect and made approachable. Here he shows his other side, that of the court painter, analyst, friend and colleague – there is no sense of status quo, only of Goya’s striving to grasp the essence of his subject.

He proceeds to fling and slap and dash loosely at his subject; he glares up at us briefly from his easel, eyebrows  inquiring as to what, exactly, we are doing there – can’t we see he is busy?

Occasionally his stare is more abstract; concentrating on some study he hasn’t quite resolved – and later, his expression is the stark, tragic one of the deaf-smitten. Only recently appointed as Director of Painting at the Royal Academy of San Fernando, he was forced to resign owing to this disability, brought on by a mysterious illness in 1792-3.

The portraits follow his development in style, and to a degree, his life, among friends, patrons and (legitimate) family until finally we are allowed to sit at his bedside, while he is administered to by his brilliant friend, Doctor Arrieta. Behind the two men shadowy figures hover, in distant conversation – are they alive or imaginary?

I made my excuses and hurried on, anxious to visit Dona Isobel de Porcel, who had been given a whole wing to herself some distance away. She had been the main draw of the show for me, yet was not included in the main exhibition. The simplicity of her portrait is misleading. The verve and zest of the artist is in very lightness of touch – her black lace veil, wound carelessly about one arm, barely covering her bronze hair, is but a few hasty brush strokes, yet convince utterly in their loose deftness. All the portraits, drawn together from collections across the globe, demonstrate his in-depth study of character, his mastery of technique; all share a play on light and shade, and a radiance of the skin. Eyes bright, their skin luminous, they glow from within the shadowy framework of the canvass he places them in.

I left Mr Goya and company reluctantly, and wandered down from the National to Regent Street; on turning a corner I bumped into Mr Foote, showing off his other leg at the Haymarket, like the brazen hussy he was. On an impulse, I allowed him to usher me in to witness the story of his life, though swift scene shifts and quick, lively banter enriched by occasional visits from Mr Franklin expounding the theory of electricity, and Prince George himself. Mr Garrick was there too, along with Miss Woffingham, and of course Mr Foote’s servant Francis Barber (on loan from Dr Johnson). All of the company gathered there were bustled through backstage, upstage, dressing rooms and wings of the theatre as Mr Foote trod the high and low.

The action is fast and merry, the whole piece is a vigorous theatrical tour-de-force, with scenes reminiscent of a Gilray or Rowlandson brought to life (the sorry incident of his leg being removed by Doctor Hunter is a prime example) – visually, the colours, lighting and period detail are atmospheric and well-studied; candle light and shadows play against walls, ceilings and floors, (for we rarely leave the theatre, save in the dark) adding drama, terror and warmth to this most engaging of plays.

Both Mr Goya and Mr Foote share a ferocious vitality, a splendid disregard for convention and status, as well as surviving life-threatening situations : Goya’s illness resulting in the loss of his hearing, Mr Foote’s ill-timed wager resulting in the loss of a leg. Both satirize, challenge and explore; both lived through turbulent times and both made enormous contributions in very different ways to our ideas on perception and cultural development.

Mr Foote’s Other Leg runs until 23rd January at the Haymarket.

Goya The Portraits runs until 10th January at the National Gallery.

The ball is arrived. Long live the ball. With its laces and petticoates, and fans and bows, and powder and masks . . .  no one knows who is who (or affects not to know) and as the evening progresses, no one much cares. Not to be outdone by the fine gentry of Vauxhall, the local gentry of Lichfield have chosen to compete even in this area of fashion.

Enter a large red Cabbage (Mrs Rotundity with trimmings), followed by a purple Pencil (Lord Withered) and a green Peacock (Lady Withered). A quadrille commences, and the Peacock is engaged by a grey Spider, (Mr Lucrative), while the Pencil makes do with the Cabbage.

The room is already half-full, with many coy guesses as to identity being tossed about; there are various innocent looking Turtles, a few Kittens and Puppies, a white Hen or two (probably Mrs Glass and Mrs Rawnsley) all jostling and slipping and capering. It is well past nine before another carriage of any significance arrives, producing one up-turned purple Tulip and one Beetroot (Lady and Lord Puffball respectively), who linger a while to adjust themselves in the court yard before joining the revellers within . . .”

From Tom Jones, Clarissa and Sir Charles Grandison to Faulkner’s Lost Stradivarius, the masked ball offered more than flirtatious subterfuge. The poor, the rich, risk-takers and gamblers could intermingle at leisure – although not always to their mutual benefit, for the same function also provided ample opportunity to thieves, thwarted suitors and assassins. Ladies’ pockets and ladies’ virtue were both besieged, warned of by writers and cartoonists alike; it was the place for seductions, elopements, kidnappings (as Fielding and Richardson illustrate) and even murder (as in Faulkner’s Lost Stradivarius). 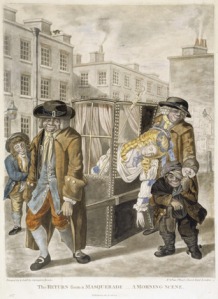 The Return from a Masquerade, A Morning Scene, Museum of London

Vauxhall, Ranelagh, the Pantheon and Carlisle House were among the most popular resorts for such unexpected excitement and pleasantries, ready for those bored with their lot in life to wander about, whispering invitations, offering, informing, discovering . . . agents and spies could benefit as much as anyone else at these gatherings : for about the time that Tom Jones was ploughing fields of petticoats and Clarissa and Grandison were verbally mortifying themselves, the ‘sbirri’ of Venice were going about their business very comfortably in their bauté and tricorni – because virtually everyone else was similarly disguised. For six months of the year the Carnival in Venice allowed the domino to throw a convenient veil not only over social distinction, allowing gamblers both poor and rich alike to scrabble for their coins on the ridotto tables, but over informers, intriguers and spies too. The same masks that sheltered their identities travelled as far as England where the idea of disguise appealed mainly for its piquancy. The loose behaviour at the public functions caused various condemnations, yet public demand saw to it that these licentious affairs continued well up nigh to the end of the 18th century.

Exhibition of a Rhinoceros by Pietro Longhi, National Gallery

The masquerade ball goes on all the time now, costumes have become avatars or profile pictures, offering the user an identity as mysterious as the domino ever was; covering up, transforming, offering  total metamorphosis : ideal as ever for flirting, gossiping and sadly some not so innocent mischief-making. The bauté and tricorno sit hovering in the ether,  their variations many and manifold, to be plucked at a moment’s notice . . . kittens and puppies, bears and baubles, wine bottles, corks, koalas with berets . . .

Aether user : “Well, what have you for me today ? Mind, I am to attend Lady HaHa’s forum this very evening, and wish to make a splash !”

Website costumier : “A splash? Why, I have the very thing – take this image of a great pool, with a fluorescent penguin adorned in grass skirt raising a cocktail in his left flipper !”

A : “ Yes, I think when I said ‘Splash’, I did in fact intend something a little less literal – have you not some fine picture of an antelope with feathers ?”

W : “But of course, I have many – look here – and here – and here : flamingo pink, with a pineapple, or celestial blue with a drunken dog, or what about a little sparkle, an explosion of fireworks with an apple peel judiciously displayed in the foreground ?

A : “Drat, I have no more time – I’ll take it ! No, wait, what is that drunken unicorn doing with those bananas ? Excellent ! I’ll have that one instead !”

(And another final vestige of sanity bites the dust . . .)

And yes, I have a kidnapping or two going on in Greenwood Tree as well . . .should I have mentioned that earlier ?

View of all the principal masquerade figures at the Rotunda, May 12th 1789, Ranelagh Gardens.Museum of London