Of Buns and Balancing Acts

Now …. Up-si-daisy…creak, groan, not getting any younger, y’know. And we’re up! Loiter forward slowly – don’t let them think you can run or there’ll be no end to their demands …

Step one: collar the one in the top hat – he knows where the food is.

Step three: allow them one encore then back out quick in pursuit of top hat (see step one)

Oh yes. The ball thing. Roll it about, kick it, balance it – keeps the punters happy.

And the old trick with the plate thingy.

Not sure I see the point to it, to be honest; perhaps it’s some form of exercise in Gestalt philosophy. More of a Copernican myself – when I’m not feeling Darwinian. But they’re a light-hearted lot here…

Right, done that, pick him up and carry out to rapturous applause. Where’s the grub?’

Well, I would quite like to think of Jumbo and his counterparts engaged in such ruminations while balancing balls and tossing plates (or was it vice-versa?) before being led off for a well-deserved pile of buns.

Elephants joined the circus relatively early in its evolution; the cavalcade of horses under the aegis of Mr (Sergeant-Major)Astley evolved in the late 18th century, and was quickly embellished with exoticism: as early as 1812 the first trained elephant performed at Cirque Olympique in Paris. This in turn set off the winning combination of circus and wild animals, most notably developed in Germany by the Hagenbecks, the world’s foremost importers and dealers of exotic animals.

The sheer logistics of transport quickly take on mind-boggling proportions in the 19th century, when the travelling circus became big business. Whole trainloads of performers both human and not travelled the length and breadth of Europe, some of them jumping aboard a passing steamship to America along the way – when Barnum’s came to London’s Olympia in 1889 their entourage comprised 450 performers, 300 horses and 21 elephants. The amount of hay alone required must have been astronomical.

A field. An ordinary, uncultivated field. Nothing untoward about it. A path running diagonally across, and a ditch running alongside. A handy pool in the middle distance, a tree or two, some wild flowers. And an elephant.

The elephant was not alone. She had wandered across to inspect the taller of the two trees tentatively with her trunk. A man with a canvas bag slung across one shoulder sauntered up beside her. ‘Come along now, old girl, you don’t want those, do you—look what I have here…’ And so saying he delved into the canvas bag and drew out some bread. This was quickly disposed of by the wandering proboscis.

A muted trundling in the distance grew gradually as a series of brightly coloured caravans grumbled across the ground; there was the occasional bark from the three dogs gambolling about, the chatter and clanking of pots and pans, swinging from their hooks in constant confabulation, a murmur of voices both within and without as the troupe dispersed, picking out their spots with the practised eye of a proprietor lately established in his new home. Each had its own identity: the fortune teller’s caravan had a huge white circle painted on the side, on blue sky with stars across which was emblazoned ‘L’Oeil Voyant’. Another, decorated with a mage in star-bespeckled robe spreading out his arms against a panoply of curtains, playing cards and tripods, heralded the coming of the Great Doctor Miraculous. A third, modest in comparison, yet of content explosive enough to outdo them all, featured a small man sailing across a night-sky, with below him the mouth of a magnificent cannon pointing diagonally up. And if the viewer were still in any doubt as to its significance, the whole was topped off by large, clear lettering that declared the occupant to be the one and only Human Cannonball: Blazer, A Marvel of the Modern World.

And so on: the clowns sported balls and hoops, the balancing act plates and cups teetering on poles and trays, and most imposing of all, the ringmaster’s own domicile, with both sides adorned with top hats, plumed horses in mid-leap and a whole collection of colourful performers, with the magnificent emblem ‘Roly Tadger’s Remarkable Circus of Oddities’ running in cheerful colours across. A modest king this, who, rather than take centre stage, chose to set his abode in the wings so to speak (in the shade of the trees), at a slight distance from the rest. A tall man in a chimney pipe hat stepped out and wandered amongst his citizens, checking on this, minding that.

Water was fetched from the pool, a clearing made for a fire, and food prepared. The elephant keeper wandered off, munching on an apple, sizing up the surrounding area. He ambled about, stretching occasionally, squinting up at a wintry sun, meandering along until he ended up near the ditch. The elephant, her curiosity regarding the trees now sated, drifted in his direction. Absently, her keeper fished another bread roll from his bag and handed it to her over his shoulder. His gaze focussed on a clump of grass overhanging the ditch.

‘Did you hear something, Milly?’ he enquired. Milly responded with a furtive rummage in his bag.

He stepped forward, and peered over to look at the ditch more carefully. He had not been mistaken. Another groan, as if in confirmation, came up from the sorry individual lying there.

‘Dear, dear. Footpads, no doubt. No good travelling alone in these parts: you wait there,’ murmured the keeper, as if the unfortunate man in the ditch were chafing to be off; the keeper turned and cupping his hands to his mouth let out a hearty ‘hallooo’ to his companions.

Instantly doors opened, feet clattered down caravan steps and an assortment of oddities both human and otherwise spilled across the field. One of them, in elegant coat and moleskin hat, with the air of a medical man, knelt in the ditch and checked the insensible body for breaks.

A decision was reached, a stretcher made up from coat and boom handles, and the unconscious man was lifted and carried back to one of the caravans. By general consensus, they put him in the caravan belonging to the Human Cannonball, he having the least cluttered of all.

Day passed into evening, evening into dawn, and come the morning the caravanserai set off again. From time to time they paused along the way: the tall man in a chimney-pipe of a hat would leap up and down steps, knocking on the door of the Human Cannonball to see how the patient was doing.

‘No memory yet? Well, well, but from the look of him, one of our kind. And we could do with an extra set of hands…’ ”

(From ‘Of Soul Sincere’, Part Three) 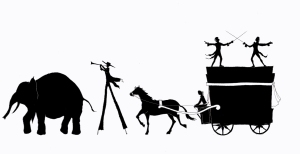 By the time Roly Tadger’s troupe is travelling the counties in the 1880s, the wildlife element of his ‘circus’ is reduced to a few horses, Milly the elephant and some performing dogs. By the late Victorian period, the trapeze artist and acrobat had come into their own, fuelling a re-discovered interest in athletics which led to the Olympics of 1896. Roly Tadger is relying more and more on human  performers (and probably his drinking has made it inadvisable to keep big cats on the programme anyway). 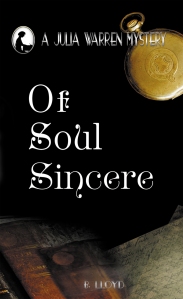 When invited by her publisher to assist a well-respected M.P. write his memoirs, Julia Warren is at first reluctant to concentrate on anything other than her next novel; however, circumstances(involving among other things unexpected plumbing) conspire to change her mind and she finds herself at once guest and employee at the great man’s rather bohemian household.

Almost immediately she encounters memories from the past, of a rather unsettling nature …

This entry was posted on March 18, 2016 by authorsanon. It was filed under 19th century curiosities, of soul sincere and was tagged with 1920s, circus, elephants, julia warren, julia warren mystery, london, mystery, mystery novel.